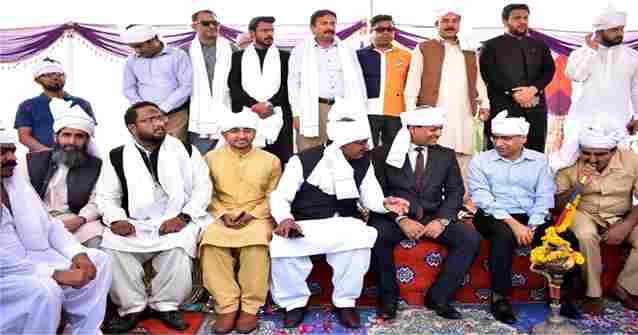 Sahiwal ( The Breaking Times – Arshad Farooq Butt ) The development of any country and the mental evolution of its youth can be gauged from its educational status.

Education is not only limited to textbooks and lectures, but also extra-curricular activities, which contribute to the mental, physical and moral development of the students.

This was stated by Deputy Commissioner Sahiwal Muhammad Awais Malik while addressing a function on the occasion of Cultural Day at Comsats University Islamabad, Sahiwal Campus.

Punjab Cultural Day was organized in the light of instructions issued by the Punjab government. The event was attended by Director Council of the Arts Dr. Riaz Hamdani, Director Public Relations Muhammad Aqeel Ashfaq, students, teachers, civil society and the journalist community.

In the Cultural Day celebrations, the students dressed up in Punjabi costumes and performed traditional dances and drama performances. The Deputy Commissioner said that he was pleasantly surprised that there was an institution on the soil of Sahiwal which was providing services of international standard.

He said that culture and way of life is the capital of any nation and its protection is also the responsibility of that nation. He said that the district government was working to enhance the culture of Punjab and especially Sahiwal through public-private partnerships.

These are the abilities that strengthen the personality and character of a young person. By participating in speech competitions in school and college, students can become well-determined for the future and also raise their voice for the complex issues of the society by becoming politicians or useful spokespersons of the society.

Director Comsats Sahiwal Campus Prof. Dr. Nazir Ahmad Zafar spoke in Punjabi and said that we should be proud of our Punjabi journey, because the history of our journey teaches bravery, courage and love and peace.

He said that today’s Punjabi youth are getting away from their journey so by celebrating Cultural Day in educational institutions we can tell the youth how alive and rich their culture is.

He said that Sofia Ikram has spread Islam through Punjabi language and has brought Islamic teachings to this land in real sense. At the end of the ceremony, Campus Director Prof. Dr. Nazir Ahmad Zafar presented a commemorative shield to the special guest Deputy Commissioner Sahiwal Muhammad Awais Malik.

DC Sahiwal also inaugurated the Spring 2022 Tree Planting Campaign on the campus by planting trees on the occasion and praised the beauty of the campus.