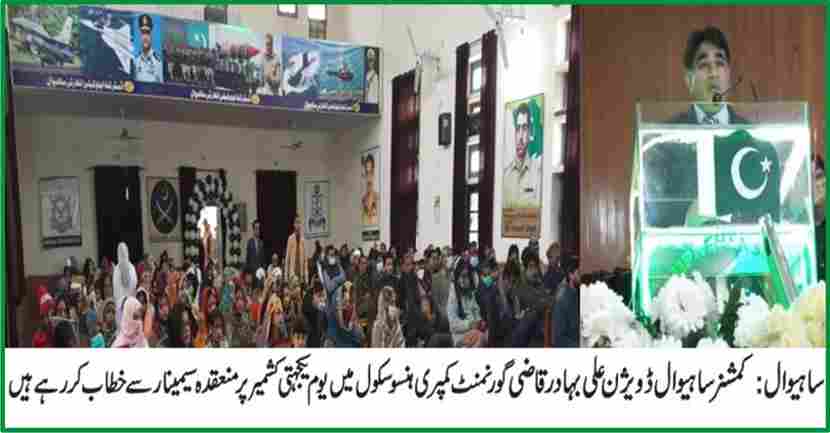 Sahiwal ( The Breaking Times – Arshad Farooq Butt ) Commissioner Sahiwal Division Ali Bahadur Qazi has said that Kashmiris are fighting for the survival of Pakistan by sacrificing their lives, whose moral, political and diplomatic support is the duty of us Pakistanis.

The persecution of innocent Kashmiris is one of the most heinous acts in history which should be strongly condemned at every level.

He has said this while addressing a special seminar on Kashmir Solidarity Day held at Government Comprehensive High School in which CEO Education Dr Muhammad Arshad, teachers and a large number of students participated.

He has said that the Kashmir dispute is an incomplete agenda for the partition of India which cannot be ignored for a long time. We have to prevent India from Nazi acts such as massacre, rape and house burning.

He has urged the youth to understand the reality of Kashmir issue and spread the struggle of Kashmiris to the youth of the world through social media.

Addressing the function, CEO Education Dr Muhammad Arshad has directed the teachers to make the students aware of the Kashmir issue in the classes so that they can realize its seriousness.