Ketanji Brown Jackson, 51, was sworn in as the 116th judge of the United States Supreme Court. 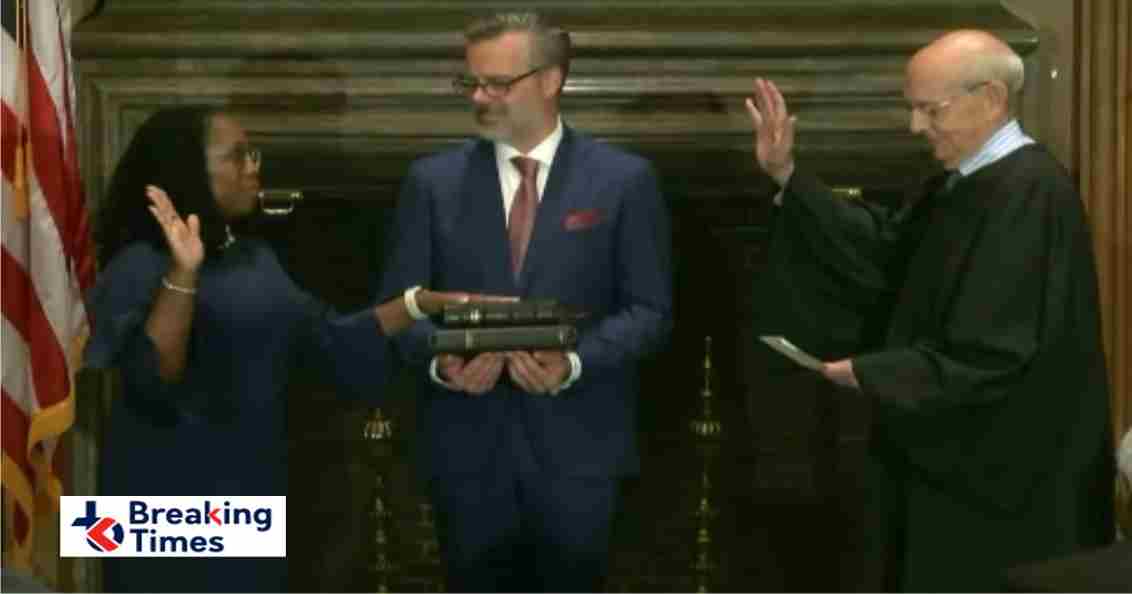 Thursday marks a new record in the United States. Ketanji Brown Jackson has become the first black woman judge of the US Supreme Court since taking oath.

At 12 noon on Thursday, Justice Stephen Breyer retired from the Supreme Court after 28 years of service, according to the Associated Press.

Moments later, in a brief ceremony inside the Supreme Court building in Washington, Ketanji Brown Jackson, 51, was sworn in as the 116th judge of the United States Supreme Court.

Her family was also present at the swearing-in ceremony, including her husband, Dr. Patrick Jackson, and their two daughters, Atalia and Leila.

According to the tradition of the Supreme Court, two oaths are taken from a new judge. The “constitutional oath” was taken from Ketanji Brown Jackson by current Chief Justice John Roberts and retired Judge Stephen Brown.

According to a statement issued by the Supreme Court, Judge Jackson said:

“With a big heart, I accept a strong responsibility to uphold and defend the US Constitution and to deliver justice without fear or favor. I am truly grateful to be part of the promise of our great nation. I sincerely thank all my new colleagues for the warm and wonderful welcome.”

The event was broadcast live on the Supreme Court of America website.

With Ketanji’s inclusion, the number of women judges in the Supreme Court has risen to four. This is the first time in the history of the US Supreme Court. The other three judges are Sonia Sotomayor, Elena Kagan and Amy Coney Barrett.

Following the announcement of the retirement of 83-year-old Judge Stephen Breyer in January this year, President Joe Biden nominated Ketanji in February next month.

In early April, the US Senate approved his nomination by 53 votes to 47. Three Republican senators sided with the government.

Former President Obama appointed Ketanji a district judge in Washington. She was then promoted by President Joe Biden to the DC Federal Court of Appeals.

Judge Ketanji will be able to begin his work immediately. However, Thursday was the last day of work in the US Supreme Court. After which the court will resume work on October 3 after a three-month vacation.

However, emergency appeals can be heard in the meantime. The Supreme Court has approved the hearing of about two dozen cases since October. During this break, Judge Ketanji will have plenty of time to understand these cases.

“Since joining the Supreme Court, our nation has taken a historic step towards making the highest ideals a reality,” House Speaker Nancy Pelosi said in a tweet.

In the midst of this Court’s brutal attacks on the health, liberty and security of Americans, they will be a vital force for equal justice for all.

Nancy was referring to recent controversial Supreme Court decisions. Today, on its last day before going on vacation, the Supreme Court ruled that the U.S. Environmental Protection Agency (EPA) PA) will not be able to regulate carbon emissions from existing plants.

Democratic Senator Elizabeth Warren from the state of Massachusetts wrote in her Twitter message that she is excited about Judge Jackson being sworn in as the first black Supreme Court judge.

As a public defender in the past, she will bring an invaluable perspective to the bench. I would also like to thank Justice Breyer for his extraordinary public service.

The Black Lives Meter organization reiterated Judge Ketanji’s statement in a tweet: “I stand on the shoulders of many who came before me.”

According to the Market Watch website, the annual income of the Chief Justice of the US Supreme Court is $286,700, while the annual salary of all eight associate judges, including Ketanji, is $274,200.