Jahangir Tareen Group is agreed on No-Confidence in Punjab. 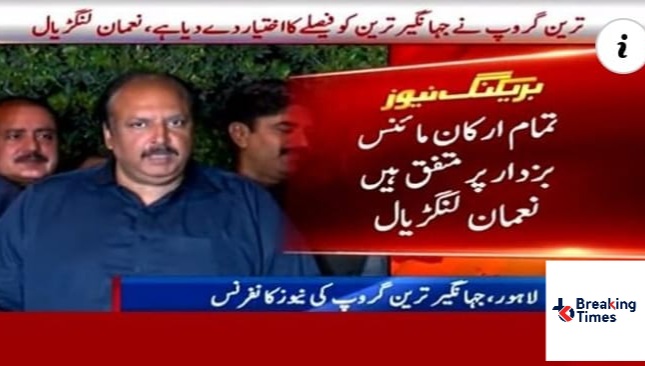 Lahore ( The Breaking Times News – Arshad Farooq Butt ) Malik Noman Ahmad Langaryal, an active member of the Jahangir Tareen group, said that all members of the group agreed on minus Buzdar. Without it, things would not work out.

Talking to media in Lahore, Malik Noman Langarial said that Tareen group had given decision making power to Jahangir Tareen.

We have been contacted by various parties. An important meeting of our party is taking place today. We will plan for the future. Malik Nauman Langaryal

He further said that Jahangir Tareen Group was a strong alliance. We were all one family. All members of the group would say Ameen to the decision of Jahangir Tareen.

Malak Noman Langarial said that whatever Jahangir Tareen decided, we would all go with him.

“The Jahangir Tareen group ranks third in the Punjab Assembly, ” he added.