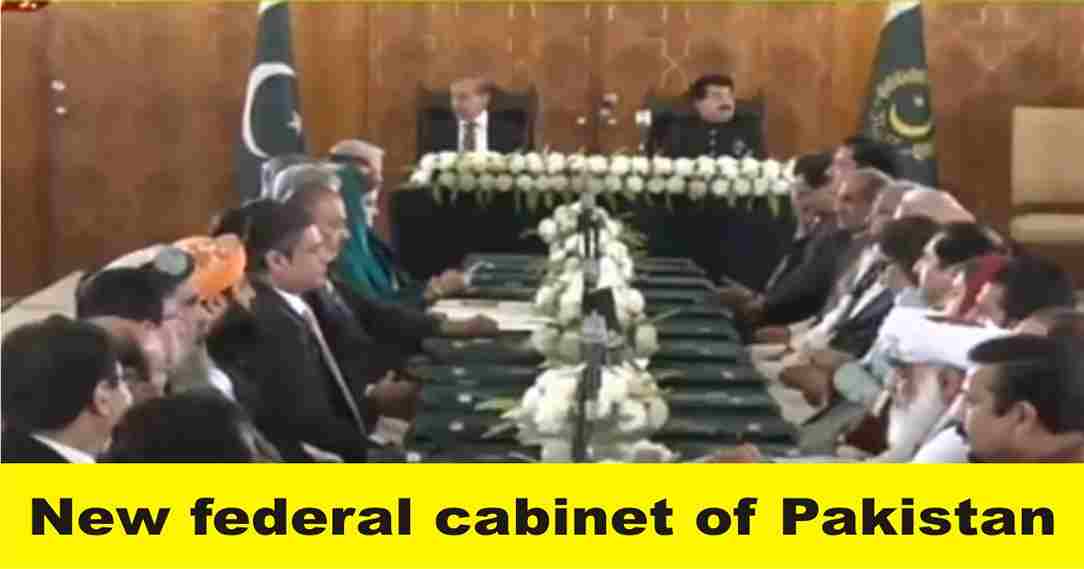 The new coalition government in Pakistan has finally formed its own federal cabinet. The federal cabinet has a total of 34 members. The cabinet includes 30 federal ministers, four ministers of state and three advisers.

According to details released by the Presidency, the new federal cabinet of Pakistan will have 12 PMLN federal ministers, two ministers of state and two advisers.

Who are the political leaders in the federal cabinet of Pakistan, let’s take a look at their politics.

Khawaja Muhammad Asif is a senior PMLN leader. Khawaja Asif from Sialkot is a domineering man in his political style. Many of his statements and political jokes made on various occasions remain the subject of debate.

He studied at Cadet College Hassan Abdal and Government College Lahore. He was also a banker for some time.

Khawaja Muhammad Asif is very popular at the national level as well as among the people of his constituency. He has been consistently winning elections from 1993 to 2018.

He has been the Chairman of the Privatization Commission, Minister for Petroleum and Natural Resources, Sports and Defense in the previous tenures of Pakistan Muslim League Nawaz.

After the disqualification of PMLN chief Mian Muhammad Nawaz Sharif in 2017, when Shahid Khaqan Abbasi was elected Prime Minister, Khawaja Muhammad Asif was given the portfolio of Foreign Ministry.

Ahsan Iqbal is the General Secretary of the Muslim League Nawaz and is considered close to both former Prime Minister Nawaz Sharif and Prime Minister Shahbaz Sharif.

He became part of parliamentary politics in 1993. He ran in the elections six times between 1993 and 2018. He won five times and failed to win his seat in the 2002 election.

Ahsan Iqbal was appointed Interior Minister on August 4, 2017. Prior to that, he was the Federal Minister for Planning and Development.

His family is not new in politics. His grandfather Chaudhry Abdul Rehman was a member of the Punjab Legislative Assembly. His mother Nisar Fatima does not need any introduction in Pakistani politics.

The PMLN government formed in the 2013 elections had been facing difficulties till the 2018 elections. The leaders of this party were reprimanded in many ways. Ahsan Iqbal is one of them. He was detained by the NAB during the PTI rule.

Ahsan Iqbal was addressing the Christian community during a corner meeting in his own constituency before the May 6, 2018 elections when a man assassinated him and injured him.

Khawaja Saad Rafique’s politics began in 1980 with student politics. He started his political activities from the platform of MSF.

He began Parliamentary politics in 1980 and in the 1997 elections he won as the PMLN candidate. He won the MNA seat for the first time in the 2002 elections. He won the by-elections for the second time in 2008, for the third time in 2013 and for the fourth time in 2018.

In the 2018 general elections, all eyes were on his constituency as his opponent was former Prime minister Imran Khan.

The main reason for his affiliation with the PTI was his relationship with former Prime Minister Imran Khan. The friendship between Imran Khan and him dates back to school days.

After Musharraf’s seizure of power, Ayaz Sadiq parted ways with the PTI and joined Pakistan Muslim League. He has been elected MNA three times in a row.

He contested the 1997 elections at the provincial level on a PTI ticket but was unsuccessful. He defeated former Prime Minister Imran Khan from NA-122 constituency of Lahore in the 2013 elections. One of the four constituencies which PTI had asked to be opened was that of Ayaz Sadiq.

Rana Sana is the President of PMLN Punjab. His politics began in 1990 with the Pakistan Peoples Party platform, and later he joined Pakistan Muslim League Nawaz.

At present, Rana Sana is one of the central leaders of PMLN. He is becoming part of the federal cabinet for the first time. Rana Sana has held important provincial ministries in the Punjab Assembly in different periods.

Rana Sanaullah was the provincial law minister at the time of the Model Town tragedy on June 17, 2014. The motives of this accident caused difficulties for the PMLN for a while.

During the rule of former Prime Minister Imran Khan, a drug case was made against Rana Sanaullah. He was arrested on July 1, 2019. He was released on bail on December 24, 2019.

Maryam Aurangzeb’s mother and aunt have long been associated with PMLN. Tahira Aurangzeb is the MNA of PMLN in the reserved seat for women.

Other ministers of new cabinet include: