Sahiwal News : Guard of Honor Ceremony in honor of nurses 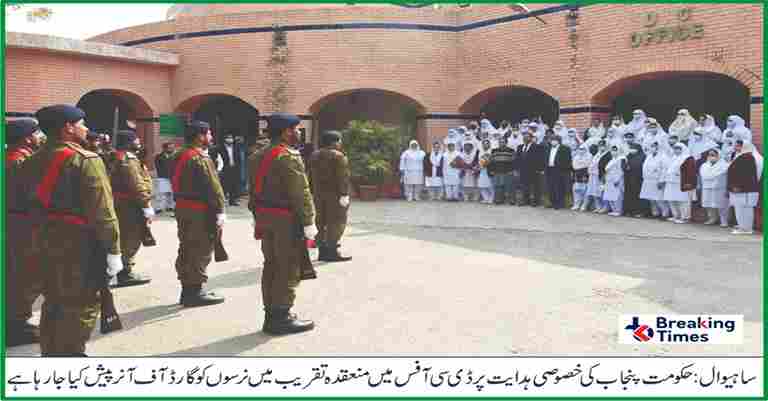 Sahiwal ( Breaking News Today – Arshad Farooq Butt ) On the direction of Punjab Chief Minister Sardar Usman Buzdar, Deputy Commissioner Sahiwal Muhammad Awais Malik held a special function in his office in honor of the nurses for their excellent and selfless services to the suffering humanity during the corona epidemic.

Health CEO Dr. Mushtaq Ahmed Supra was also present on the occasion. Expressing his views, Deputy Commissioner Muhammad Owais Malik said that it was their duty to acknowledge the superior services of nurses. During the Corona epidemic, nurses performed their duties very well.

He added that when the heirs were left behind, the nurses served the sick. Therefore, nurses had a key role to play in the recovery of the sick.

He added that the role of nurses in the health sector was less than appreciated. He said that Punjab Chief Minister Sardar Usman Bazdar was announcing special incentives for nurses.

Deputy Commissioner Muhammad Awais Malik said that nursing profession was valued all over the world. The Punjab government had also improved the service structure of nurses. The special police force also presented guard of honor to the nurses at the ceremony.