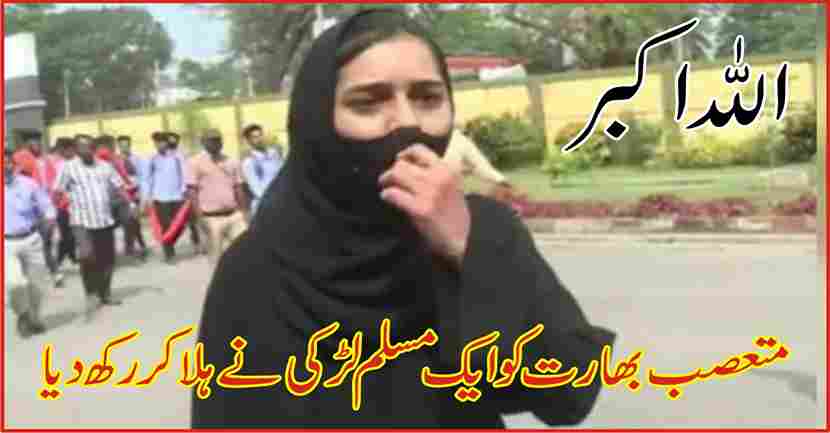 Indian Muslim girl Muskan has become the symbol of resistance in India and people on social media and mainstream media are praising her for her bravery.

According to the details, the university girl Muskan came to submit her assignments. She was wearing Hijab. Some extremist Hindus from RSS followed her and started shouting slogans of J Shri Ram. Upon it, the university girl confidently raised AllahuAkbar slogans and became the symbol of resistance.

In India, the issue of banning Muslim girls from entering educational institutions and wearing hijab has intensified recently and world leading Newspapers including Washington Post and New York Times are covering the situation referring India insecure state for the Muslims and minorities.

For the past several days, Muslim girls wearing hijab have been barred from entering educational institutions, colleges and universities in various Indian states.

Yesterday in the Indian state of Karnataka, a college girl raised the slogans AllahuAkbar against the Bharatiya Janata Party extremists and raised her voice in favor of the Hijab. After this incident Educational institutions in the state of Karnataka have been closed for three days due to protests.

Expressing solidarity with the Muslim girl Muskan, Allah Akbar is currently one of the top trends on twitter and facebook in India and Pakistan.

Talking to Indian TV, Muskan, who has become a symbol of resistance, has said that she was going to college to submit assignments when the mob blocked her way and chanted slogans in response to which she raised the slogan of Allahu Akbar.

The video of the incident has gone viral all over the world including India and Pakistan and social media users are calling Muskan a symbol of resistance. They are also urging Kashmiris to raise their voices if they want to get freedom.