At the convocation, certificates were distributed among 387 BA, B.Sc and MA/MC students. 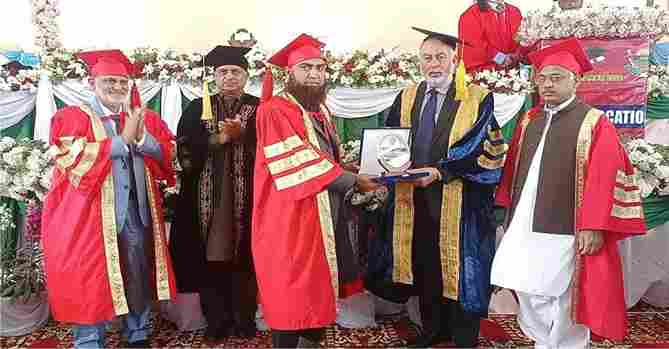 Prof. Dr. Ashiq Hussain of DPI Colleges and Prof. Muhammad Masood Faridi were the guests of honor of the convocation.

Addressing the students, Prof. Dr. Mansoor Akbar Kundi said that you have an important role to play in giving direction to the society and you will prove to be a valuable asset for the development of the country.

He said that education is the history of nations and education system is the cause of revolution in society. He called for the implementation of a uniform education system where education could be imparted on an equal footing without any distinction between rich and poor.

“The fact that so many female students have graduated proves that our society is embracing the advancement of women,” she said. On this occasion Principal College Prof. Dr. Mumtaz Ahmed thanked all the guests and congratulated the graduating students.

In his address, he gave a detailed account of the services rendered by the college to the society, citing the shining traditions of the college and the steps taken for their revival. He said that the college has provided the best students for the development of Pakistan and Pakistani society.

He also thanked the teaching and non-teaching staff for preparing the convocation and making it a success. On this occasion DPI Colleges Prof. Dr. Ashiq Hussain in his speech said that all the students deserve congratulations and also all the people including parents and teachers who helped them in achieving this difficult goal. Gave

He said that these young people would play their role in making the country and nation great. He said that Government Graduate College Sahiwal is one of the few colleges in Punjab which has provided the best manpower in all walks of life. He also announced the construction of a new building and laboratories for the college.