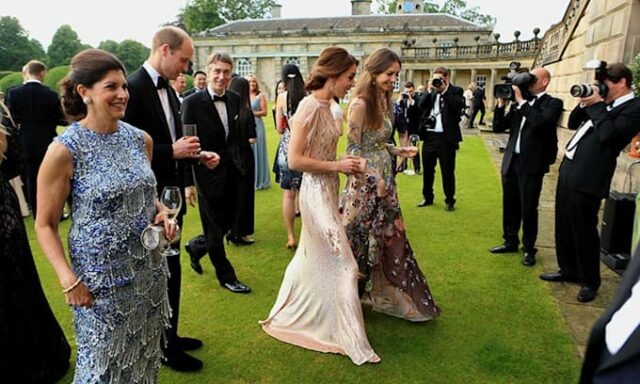 The daily beast reported this news first and stated how Kate demanded William to phase out Hanbury’s family from the group of friends “ known colloquially as the Turnip Toffs because of vast holdings of arable farmland.

The British tabloids fixed this rumor of an alleged royal-related feud. Besides, ELLE reported the Duchess of Cambridge took this seriously and considered legal action over the story. Let’s learn all about the life of Rose Hanbury.

Who Is Rose Hanbury?

Rise is the Marchioness of Cholemondeley, wife of a marquess. A marquess ranks above one point than an earl but below a duke in the British nobleman society. She is only 33 years old and married to David Rocksavage. He is 58 years old and is the 7th marquee of Cholmondeley. According to Tatler, they met in Italy during the holiday in 2013 and announced their engagement six years later, one day before the wedding.

Well, the 33 years old Rose signed a contract with Storm Agency. It is a modeling agency founded by Kate Moss. She became well known to the public when she and her sister’s picture appeared in the British tabloids. They were along with Prime minister Tony Blair at that time. Rose’s husband is a filmmaker.

Both rose, and kate have three children. Kate has two sons named Prince George and Louis and one daughter named Princess Charlotte. Rose is also the mother of three, and their names are Alexander Oliver and a daughter named Lady; Kate and Hnbury are friends, and their house distance is 4 miles.

They went to prestige school together; Middleton attended Malborough and Hanbury went to Stowe School. If we talk about their husbands, Rose’s husband, David Rocksavage, net worth is almost £112 million; meanwhile Prince William’s is £30 million.

What has the connection between Hanbury and Royal Family?

The grandmother of Rose was Queen Elizabeth II’s friend. She served as a bridesmaid at her wedding to Prince Philip Tatler reported two couples are thought to have regularly double-dated, and both ladies also have patrons of the East Anglia Children’s Hospice.

The allegation between Kate and Rose linked to Meghan Markle. She is the wife of Prince henry. However, there is not enough evidence t support this feud about the royal family. Also, there is no clue regarding this claim of how Kate demanded Rose phase out of their society.