Kylie Bunbury, Is Expecting a Baby With her Husband, Jon Ryan Alan Riggins. 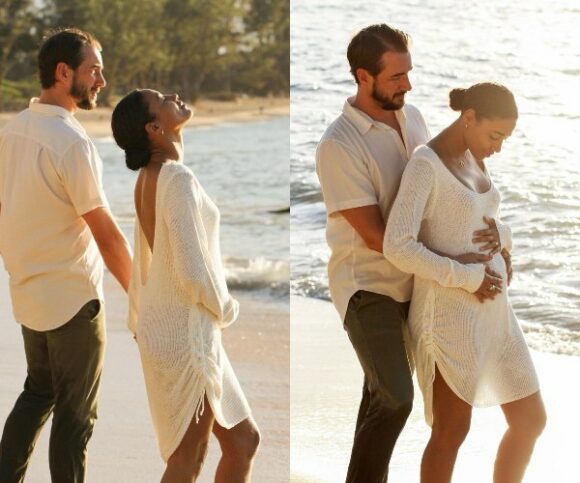 The Big Sky star Kylie Bunbury is expecting her first child. She is a Canadian American actress and announced that she was expecting a baby. Kylie posted a thread of maternity photos with her husband, “Jon Ryan Alan Riggins.”

She is showing her baby bump in the pictures that are taken in Maui, Hawaii Beach. Her husband Jon gave a caption, and life is a series of awakenings. This is our greatest one yet.” He took Instagram to announce the news.

They got engaged on 8th April 2018, and her boyfriend got down on one knee during their trip to the Bahamas. Kylie made the announcement on Instagram with the caption 4.8.18. After two years, the couple got married on New York Day of 2020.

Their wedding was held in Portugal on 1-1-2020. The actress took out time to talk about her wedding and feelings, “there are no words how truly I am remarkable and enchanting our wedding week In Madeira was. We celebrate our Love with friends and family in ways we will never forget.

Furthermore, she said, so grateful for this life and Love, these are true colors of our world… I am a wifely now!”

Who Is Kylie Bunbury?

Kylie Bunbury is a Candian American Actress and is well known for her role as Cassie Dewell in the crime series named Big Sky. She was born on 30th January 1989 in Hamilton, Canada. Her father is a Guyanese Canadian footballer, and her mother is an American.

Kylie was raised in England for two years and then spent seven years of Childhood in Medeira, Portugal. After that, she shifted to prior Lake, Minnesota, USA. She has two younger siblings named Logan and Teal.

She began her career as a model, but the agency suggested she act. Kyle landed her first role as Kathleen in the series Days Of Our Lives. Moreover, she made an appearance in Prom and The Sitter in 2013.

Her role was noted in the series Under the Dome. Kyle starred in the Netflix series “When They See Us” in 2019. Moreover, she joined the cast for the Sky Tv adaptation of Brave New World.