No-Confidence Motion : Next 48 Hours are Important

Maulana Fazal ur Rehman claims Good News a Step away 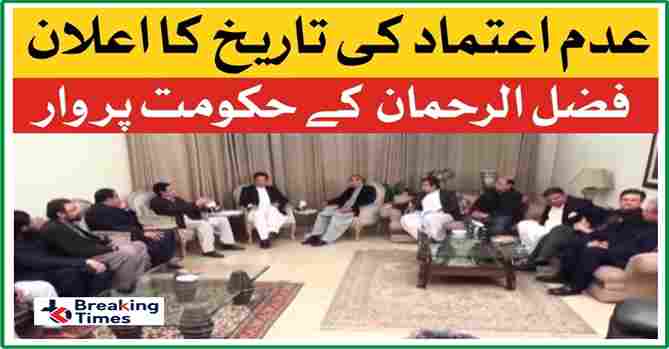 Islamabad ( The Breaking Times – Arshad Farooq Butt ) Maulana Fazal ur Rehman claims opposition has completed its game of numbers. Next 48 hours are important for no-confidence motion in Pakistan.

On the other hand, PML-N leader Chaudhary Tariq Bashir Cheema has claimed that there was no talk about no-trust move in the PM’s meeting with the Chaudhry brothers.

It is not decided at this time that we will stand with the government or opposition. If Shahbaz Sharif has invited us, it is not strange to go to him. Tariq Bashir Cheema.

Talking in a Private Tv Geo News program, Tariq Bashir Cheema has said that in his meeting with Chaudhry brothers, the Prime Minister Imran Khan has said that people of opposition are coming to them nowadays.

On this, Chaudhry Shujaat has said that everyone has the right to come. Politicians meet each other. No need to tell anyone every day that we are with him.

Is Establishment Supporting the Opposition for No-Trust Move?

This question is being asked a lot on whose signal the opposition is going to bring a no-confidence motion against PM Imran Khan.

The government also believes that some elements in the establishment are supporting the opposition. In this regard, some people think that the army chief has become disillusioned with this government and has signaled to the opposition that he will remain neutral during the no-confidence motion against PTI government. DG ISI General Faiz Hameed was also replaced because he was a supporter of the PTI government.