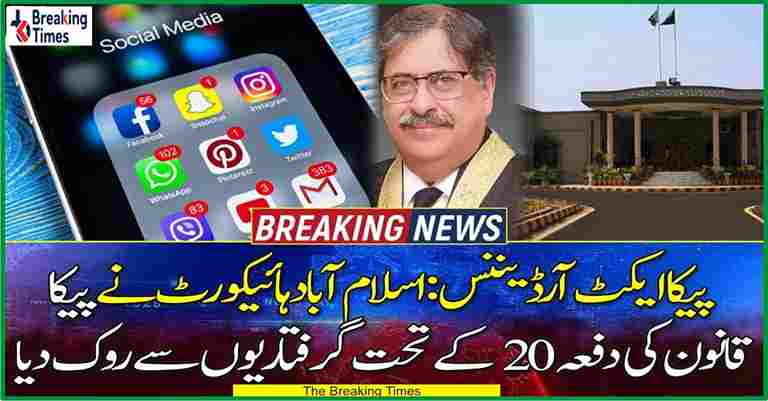 Islamabad ( The Breaking Times – Arshad Farooq Butt ) The Islamabad High Court (IHC) has issued a written judgement against the amendment in The Prevention of Electronic Crimes Act (PECA) through an Ordinace by the President of Pakistan Arif Alvi.

The Islamabad High Court (IHC) has directed the Attorney General (AG) to appear before it tomorrow to assist the court in justifying the introduction of amendments through Ordinance and interpreting it in the light of international law.

The order states that Federal Investigation Agency (FIA) should exercise its powers under SOPs. No arrest can be made without completing an inquiry. It is important to give the person concerned a chance to clean up during the inquiry. The FIA ​​and Home Secretary will be responsible for any violation.

It should be noted that the government of Pakistan is being criticized on the amendment of the PECA Act through an ordinance. The ruling coalition party MQM Pakistan has also come out against the PECA Act Ordinance.

MQM Pakistan leader and Federal Minister Amin ul Haq has written a letter to the Prime Minister Imran Khan on the controversial PECA Amendment Ordinance and demanded that the PECA Amendment Act be withdrawn.

On the other hand, the Islamabad Anti-Terrorism Court has rejected the request of FIA to give further physical remand of journalist Mohsin Baig. The court has sent Mohsin Baig to jail on a 14-day judicial remand.