SC has adjourned the hearing till tomorrow. 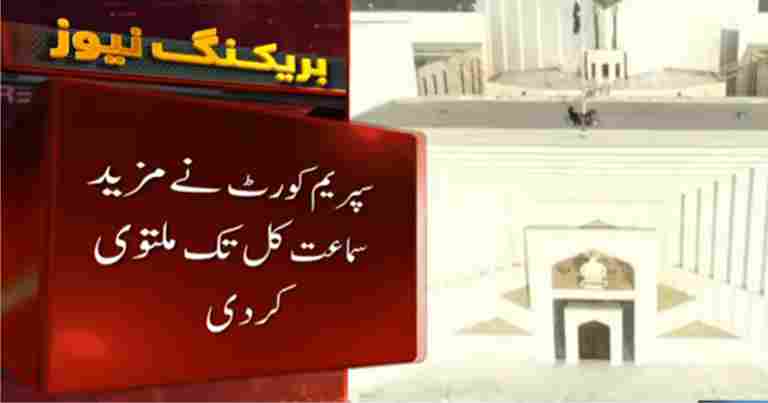 The Supreme Court of Pakistan has taken the notice of current political crisis in Pakistan and has directed all political parties to ensure law and order in the current situation. Further hearing of the notice regarding rolling of Deputy Speaker will be held tomorrow.

According to the details, a three-member bench of the Supreme Court heard the notice regarding government steps. The court refused to issue an immediate restraining order against the government’s actions. Justice Ijaz-ul-Ahsan remarked that steps have been taken. Therefore, immediate orders cannot be restrained.

The court held that it was aware of the prohibition given in Article 5 of the Constitution. We have to see what is the status of Rolling Deputy Speaker. All political parties and state institutions involved in the no-confidence motion should ensure law and order. No one should try to take advantage of this situation.

The court issued notices to the Attorney General, Home Secretary and Secretary Defense and adjourned the hearing till tomorrow.

The Chief Justice remarked that everyone is fasting in Ramadan. Therefore, the hearing of the case is being adjourned till tomorrow.

It is to be noted that SC has taken the notice on two steps taken by government i.e dismissal of the no-confidence vote in the National Assembly against Prime Minister Imran Khan and the subsequent approval of the president to dissolve National assembly.

PMLN President Shahbaz Sharif has said that his demand was not premature but transparent elections. We will accept the decision of the Supreme Court regarding the dissolution of the Assemblies.

Talking to private TV Channel Dunya News, Shahbaz Sharif said that an attempt was made to crush the plant of democracy and violate the constitution.

The no-confidence motion was supposed to be provocative today but the Deputy Speaker in a very crude manner obeyed the word of a minister and rejected the no trust motion. The malice of the government was obvious. Imran Niazi left no stone unturned in spreading anarchy.

President Supreme Court Bar Council Ahsan Bhoon said that dictators were violating the constitution. This is the first time a dictator in civilian clothes has done such a thing. I think Article 6 will apply to the President, the Prime Minister, the Speaker, the Deputy Speaker and the Law Minister.

Talking to media, Ahsan Bhoon said that the no-confidence motion could have been rejected in the beginning. Now there was no choice but to put it in front of the house.

Leading lawmaker and PPP leader Aitaraz Ahsan, while commenting on the proceedings of the National Assembly, has said that what the Deputy Speaker has given rolling is unconstitutional.

A movement that you make in front of a speaker in a chamber is called a motion. If the Speaker considers this motion to be against any law, he can reject it.

But once that movement comes to the floor of the house, it does not remain a movement but a resolution. That is, motion becomes a property of the floor as it progresses. The government can no longer reject it.