The Revenue Awami Khuli Kacheri received a total of 63 applications 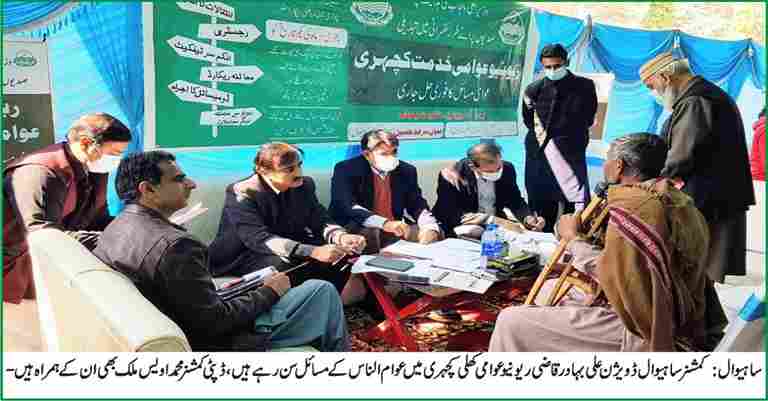 Sahiwal ( The Breaking Times – Arshad Farooq Butt) On the direction of Punjab Chief Minister Sardar Usman Bazdar, Revenue Awami Khidmat Kacheri was organized in Sahiwal Division to solve the problems related to the revenue of the people.

Commissioner Sahiwal Division Ali Bahadur Qazi and Deputy Commissioner Muhammad Owais Malik listened to the problems of the people in the Revenue Awami Khidmat Kacheri held at DC Office and issued orders on the spot for their solution.

ADCR Asim Saleem, Assistant Commissioner Sarmad Hussain besides Tehsildar, Lawyer, Patwari Staff Land Record were also present on the occasion. Speaking on the occasion, Commissioner Ali Bahadur Qazi said that the purpose of the Revenue Public Service Court was to resolve the grievances of the people under one roof in which no negligence would be tolerated.

He said that the first priority of the present government was to provide facilities to the people and in this regard the Revenue Awami Khidmat Kacheri was now being set up in the first two working days of every month to facilitate the people.

Talking on the occasion, Deputy Commissioner Muhammad Owais Malik said that Revenue Awami Khidmat Kacheri was a revolutionary initiative of the Punjab government where the problems of the people related to revenue were solved under one roof.

He directed the revenue staff to facilitate access to the public so that their problems related to revenue could be resolved immediately and the objective of holding Khuli kacheri could be achieved.

The Revenue Awami Khuli Kacheri received a total of 63 applications on accuracy records, registry, registration of transfers and other matters relating to revenue. Most of the requests were resolved on the spot.