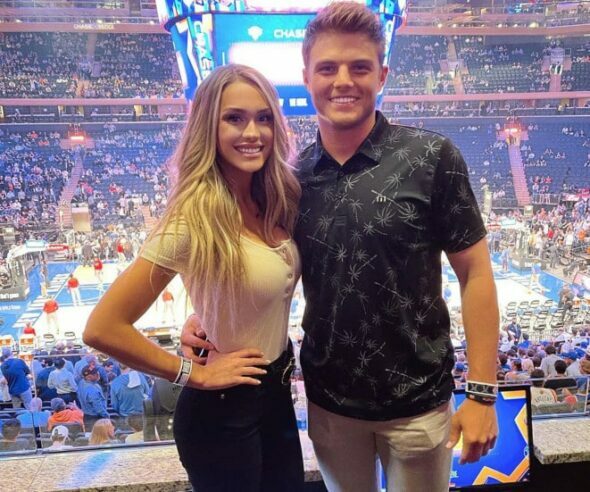 Mormon New York Jets quarterback Zach Wilson is facing trolling when he shared a snap with his new girlfriend on Instagram. There were rumors that he had slept with his mother’s best friend.

The 22-year-old football player came into the headlines in July when his former partner Abbey Gile claimed that their relationship had ended because of an affair with an unnamed friend of his mother.

He also posted a picture in which he was cozying up to his new gal pal on Friday. The post was flooded with comments about his new girl being too young for him and rumors that he had a romantic relationship with his mother’s friend.

The athlete shared a snap with his new girlfriend Nicolette Dellano at a restaurant alongside his teammate Broxton Berrios and partner Sophia Culpo in honor of their 27th birthday. In the picture, all were seen around the table with food and a smile, and Wilson put his arm around Dellano.

In the shared picture, he gave the caption, ‘ happy birthday to my guy!’ There was a flood in the comment section where some wrote, ‘She is too young, Zach.’ Another fan said, ‘way too young, agree someone else, while a third person asked, Why is not her 40s.?

Moreover, some people urged that he make a move on model Gisele Bundchen who is speaking with divorce lawyers and has been split from her husband, Tom Brady.

Many reports came on the wen which said that she and Tampa Bay Buccaneers ended a marriage and Wilson flirted with Bundchen. In a tweet, Zach said, ‘ don’t worry, Giselle, I got you.’ according to The focus news, he never posted it at all, and it was photoshopped. However, people did not stop people from talking about it.

One user joked, ‘ next post better be Gisele, and another said, Zach Gisele is single; please get to work, sir.’ Both have been linked since June, and they were photographed enjoying a Yankees game together at that time.
This baseball date came on screen just in one month when Gile made the shocking allegation that Willson cheated on her.
However, Milne shared a picture of him and Gile together and branded her a ‘ homie hopper.’ She fired back, ‘ Wilson was sleeping with his mother’s friend, and that’s the real homie hopper.’

Gile did not share details of that friend, and another person appeared to back up her claims, ‘Lol, it’s true. I know my mother’s best friend, and she freaked out about it for a while.’
After two weeks, in a press conference, he asked about Gile’s allegation; he dodged the question and said he wanted to focus on the sport instead.

Wilson responded, ‘it’s focusing on football and really all I can do. It is what it is. Wilson remained quiet about the scandal, and Joe McMahon made a comment on the Instagram photos of him and wrote, ‘I don’t know what’s going to be the bigger joke, the entanglement or your NFL career.’
However, Gile and Wilson parted ways, and the couple did scrub each other from their respective social media accounts. After that, Gile ha removed the Instagram account.

New York Post said that she and Wilson started dating in school. The current Wilson’s girlfriend is an influencer and boasts over 250,000 followers on TikTok and more than 40k on Instagram.
She said on his 20th birthday, ‘he is a kind, selfless and hardworking person. I am the luckiest girl, and have no idea what I did to deserve him.’

Wilson was raised in Draper, Utah, and has six siblings. Is father’s name is Mile, and he played college ball for the University of Utah in the 1990s. He went to the Church of Latter Day Saints sponsored Brigham Young University and played for their team, the Cougars.

According to 2021 Desert news, he said, ‘I consider myself a spiritual person and feel like I have always had a good entanglement with God in my life and strengthen his relationship with God.’

Now, Gile is a student at Utah Valley University in Orem, and She is a member of the dance classes at the school.
University also offers an extensive Mormon studies curriculum and boasts the largest LDS Institute program in the world. Well, the couple scrubbed each other from other respective social media accounts and removed their Instagram account.

Wilson suffered from a poor debut in 2021 and won 13 appearances that have worth $35 million per year.
He also said in June, ‘ I really do a lot of confidence in myself and think I can do best, and anybody does not say that they are not a true competitor.

In the last few years, Lisa Neeleman Wilson has worked as a personal trainer and posted rants on Instagram.
She denied rumors in July 2021 and stated, ‘ I don’t have an only fans account and have no idea what it is. She posted a video and talked about the disadvantages of social media for children. In the clip, she said, Satan always finds a way to come right into your home, the worst part? You let them in, paid him to do it.’