Dua Zehra has released a video statement and rejects her father claims. 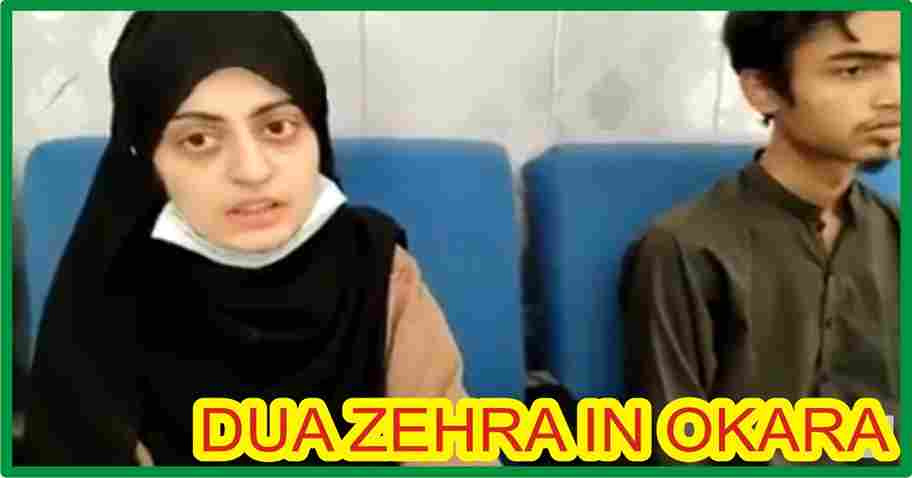 Dua Zehra, a girl who went missing ten days ago from Karachi, has been rescued by District Okara police of Punjab province.

A photo has been released by Okara police in which Dua Zehra can be seen with her husband. Her husband name is Zaheer and three years ago Dua Zahra and Zaheer became friends through PubG video game.

According to Okara District Police Officer Faisal Gulzar, Dua and her alleged husband Zaheer are currently in the custody of Haveli Lakha Police Station. The DPO says that Dua Zahra has filed a harassment petition against her family in Lahore.

Karachi police have been informed about the recovery of Dua Zehra and Zaheer. Dua has also released a video statement. In this statement, the position of Dua is that she had left home of her own free will and she has got married to a boy named Zaheer.

In the video released by the police, Dua says that her parents were trying to force her to marry her cousin Zain ul Abidin, which she did not agree to. Here is the latest video of Dua in Okara city police station.

In the video, Dua claims to have been tortured at home. That is why she came from her home of her own free will.

“No one kidnapped me. I did not bring any valuables from my house. My family is misrepresenting my age. I am an adult and I am 18 years old. I have voluntarily got married to Zaheer Ahmed. There is no coercion. Please don’t bother me. I am very happy with my husband at home.”

On the other hand, Dua’s father Mehdi Kazmi claimed in a press conference on Tuesday morning that his daughter could not be 18 years old. Because they haven’t been married for 18 years now.

Mehdi Kazmi said that they were married on May 7, 2005 and according to this calculation, the age of prayer cannot be 18 years at all.

He alleged that a fake marriage certificate had been prepared for his daughter. Dua’s father requested that his daughter be brought back to Karachi and that she be kept in the Child Protection Bureau. He stressed the need for a transparent investigation into the matter.

Dua Zehra, a girl allegedly abducted from Karachi, has recorded her statement before a Judicial Magistrate in Model Town Court, Lahore.

Allegedly abducted girl Dua Zehra Kazmi and her husband Zaheer were produced before the Model Town Court in Lahore under tight security.

On a court order, the policemen took her husband Zaheer out of the courtroom. After that, Dua Zehra sat in the court room for ten minutes and after her condition returned to normal, her statement was recorded.

It is to be noted that Dua Zehra went missing from Golden Town of Karachi city on April 16, 2022. She married Zaheer Ahmad of Lahore city.