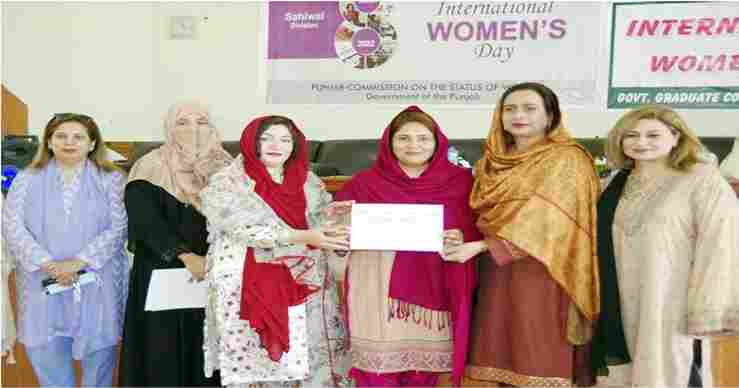 Sahiwal ( The Breaking Times – Arshad Farooq Butt ) A seminar was organized at Government Graduate College for Women, Sahiwal on the occasion of International Women’s Day 2022.

Director Colleges Prof. Masood Faridi and Deputy Director Colleges Shabab Fatima were the guests of honor. Addressing the seminar, Mrs. Muneeb Khawar Shehzad said that women played a vital role in stabilizing Pakistan and the Punjab government was taking revolutionary steps for the welfare of women.

He further said that more opportunities should be provided to women to move forward so that they could play their role in the development of the country. Addressing the seminar, Director Colleges Prof. Masood Faridi said that daughters were our pride and our future.

He said that Allah gave woman high rank and this needed to be recognized. He further said that the names of brave women would be written in golden letters of history.

Deputy Director Shabab Fatima said that the whole world was following the position given to women by the Holy Prophet.

“We need to work on women’s rights as well as keeping them healthy,” she said.

College Principal Armaghana Zain and Vice Principal Naghmana Siddique in their speeches said that on International Women’s Day, it should be reiterated that the formation of society should be helped by adhering to Sharia and moral values.

At the end of the seminar, certificates of appreciation were also distributed among the students and lecturers. Among the participants of the seminar were Razia Khan, Jawariya Khalid, Sameera Khan, Hina Imtiaz, Shabana Farooq, female students and a large number of women from other walks of life.