PTI workers are venting their anger through memes. 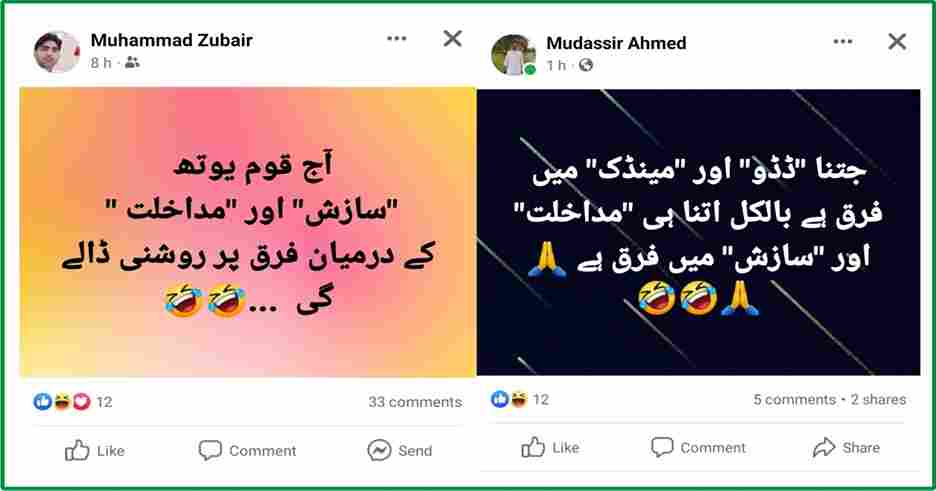 A recent press release issued by the DG ISPR said that there were no words of conspiracy in the NSC meeting. The letter contained a non-diplomatic tone that amounted to interference.

In the picture shown at the beginning of this post, a PMLN worker, realizing the intentions of the PTI supporters, wrote that today PTI supporters shed light on the difference between conspiracy and interference.

A user Mudassar Ahmad writes that There is as much difference between conspiracy and intervention as there is between Daddu and Frog. (Daddu is a punjabi word means frog)

In another Meme, Begum asks a Hakeem (physician) to prescribe a good medicine. My husband is good at conspiracy but can’t intervene.

A clip of PK movie has been shared in which Aamir Khan corrects the style of a barber’s pent by touching his hip. Another user has shared a photo of Imran Khan with Khawar Manika. The user called it a conspiracy. In the second photo, Imran Khan is married to Khawar Manika’s wife. The user has called it interference.

There is no ambiguity in the press conference of DG ISPR. He made it very clear that there was no conspiracy to overthrow the government. No funding proved. However, the PTI workers have a special agenda behind sharing those memes.