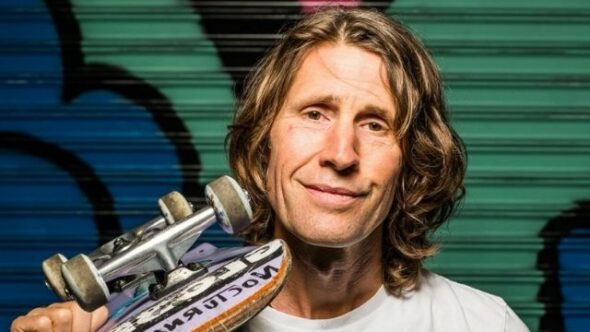 John Rodney Mullen is a popular American freestyle skateboarder, inventor, entrepreneur, and public speaker. He was born on 17th August 1966 in Gainesville, Florida. His name comes as the most influential street skater in the sport’s history. He began skateboarding at age ten on New Year’s Day, 1977.

It all started when his neighborhood friend gave him a skateboard. His father was not a big fan of this and told Rodney that if he got hurt while skating, he would stop all this.

Rodney said, ‘my father would not let me have a skateboard. He thought if I would get hurt and never get good. He was a dentist, but before that, he was military, and sometimes you would call him. Furthermore, Rodney said, I learned skating in our garage. Also, vert skating was sone in pools where you could get airborne and be weightless.”

Mullen started practicing in the family’s garage while wearing a set of pads. He also spent with his sister’s school friends, who skated on weekdays.

In 1978, Mullen finished fifth at the US Open Championship in the Boy’s Freestyle division. Walker Skateboards sponsored Mullen from 1978 to 1980. It is a skateboard company founded by Bruce Walker. He describes the period from 1979 to August 1990 as the most creative moment. Rodney was a member of Powell Peralta’s prestigious Bones Brigade squad.

He won the title of “ the godfather of contemporary street skateboarding” at the age of 14. He said, “ I defended my world title over 35 times. I am genuinely happy about it only twice. The rest were hollow victories tainted by playing it safe.” Moreover, he also established brands and businesses and became a well-known public speaker.

Rodney Mullen married Traci Mullen in 2000. A fact is that he slept in boots to treat severe pigeon symptoms as a youngster. Despite that, Phil Chiocchio, who is the owner of the Florida skatepark sensation Basin said of Mullen, “ he had an extraordinary agility with his feet.”

The professional American street skateboarder is earning a handsome amount of money. At this time, Rodney Mullen’s Net worth is $30 million.