The Supreme Court has declared the ruling of the Deputy Speaker unconstitutional. 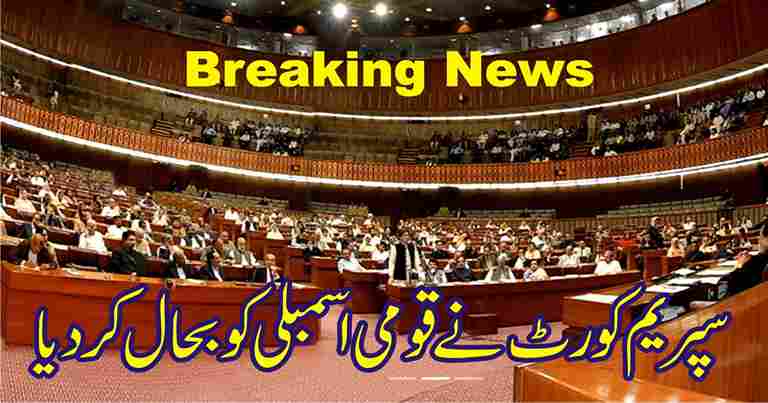 A five-member larger bench of the Supreme Court of Pakistan has announced the verdict in the case of suo moto of Deputy Speaker Ruling.

The Supreme Court has declared the ruling of the Deputy Speaker unconstitutional. The Chief Justice said that the verdict was being pronounced from five nil.

The Chief Justice inquired whether you have to demarcate the whole country or specific area. On this, the Chief Election Commissioner said that the whole country has to be demarcated. They need six to seven months for demarcation. Four months are needed for delimitation and three months for the interim government.

It is to be noted that opposition parties had filed a no-confidence motion against Prime Minister Imran Khan on March 8 and a meeting of the National Assembly was convened on April 3 to vote on it. On the day of the meeting, the united opposition parties also filed a no-confidence motion against Speaker Asad Qaiser, due to which the meeting was chaired by Deputy Speaker Qasim Suri.

During the meeting, Federal Law Minister Fawad Chaudhry, referring to Article Five, said that the no-confidence motion of the opposition was in fact a foreign conspiracy.

The Deputy Speaker, while acknowledging his argument, gave a ruling and rejected the no-confidence motion. As soon as this “surprise” of the government came to light in the National Assembly, the Prime Minister sent a summary of the dissolution of the Assembly to the President. The President accepted the advice and dissolved the National Assembly.

The government’s surprise led to a constitutional crisis in the country, which Chief Justice Umar Ata Bandial took notice of.