Rumors are circulating that Imran Khan's video is coming soon. 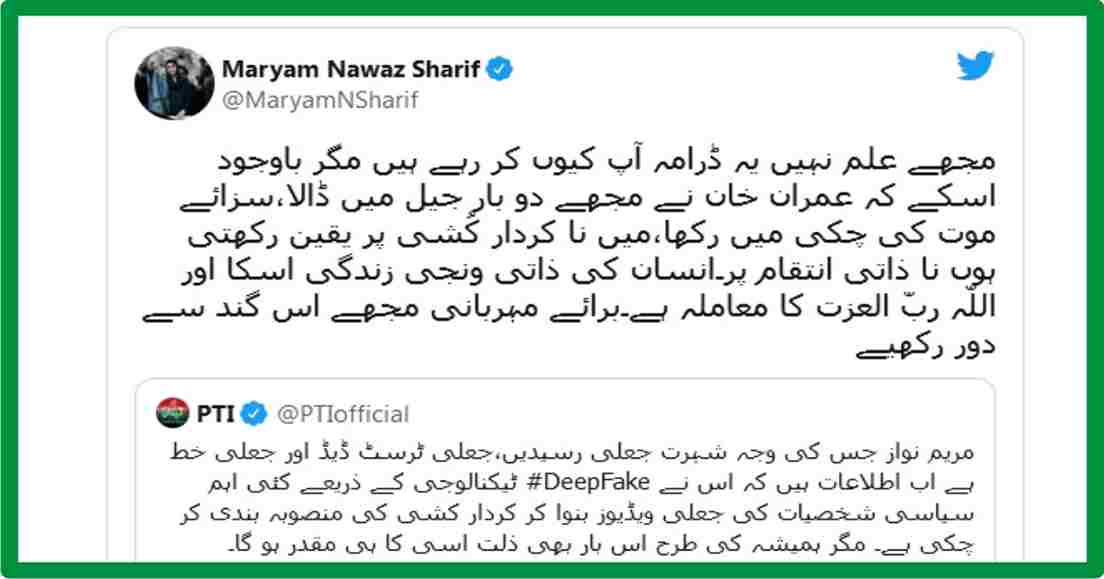 According to the details, PTI’s official Twitter handle “PTI” shared a video regarding awareness of deepfake videos technology with this message.

In response to this tweet, Maryam Nawaz has said that: “I do not know why PTI is doing this drama. Imran Khan put me in jail twice. Yet I do not believe in character assassination or personal revenge. Man’s personal and private life is a matter for him and Allah, the Lord of Glory. Please keep me away from this odor.”

A Muslim League N supporter asked Maryam Nawaz why she did not approach the FIA ​​on these allegations. On this, Maryam Nawaz said that she would submit a written request to the FIA ​​Cyber ​​Crime to take notice of this.

What is DeepFake Technology?

Deepfake technology is used to edit videos. It involves taking a person’s face and applying it to another person’s body.

And then his facial expressions can be changed through machine learning. This makes it difficult to tell if the video is fake or real.

The word DeepFake is derived from the Artificial Intelligence’s Deep Learning Program, which means technology that is completely fake but so deep that it cannot be identified.

Using DeepFack technology, a face taken from a photo can be applied to the body of a person in a video. And even his facial expressions can be replicated through the generative adversarial network.

In her message on micro blogging website Twitter, Dr Shireen Mazari says that the PMLN has once again returned to its old ugly ways.

This time it has made nasty videos against Imran Khan through foreign deepfake technology. This is a core component of the PMLN policy.

Anchor person Iqrar ul Hassan says that if any video of Pakistan Tehreek-e-Insaf chairman Imran Khan comes to light, he will reject it. In one of his tweets on micro blogging website Twitter, Iqrar-ul-Hassan said:

“If any possible video of Imran Khan ever comes to light, regardless of whether it is real or fake, I reject it from now on.”

The same was done in the case of Zubair Umar. We are all very sinful in our personal lives. Leaders’ decisions and public behavior should be discussed. Don’t go into their bedrooms.