No-Confidence Motion : Things are getting worse for Imran Khan

PML-Q and MQM Pakistan likely to vote for opposition in the No-Confidence Move. 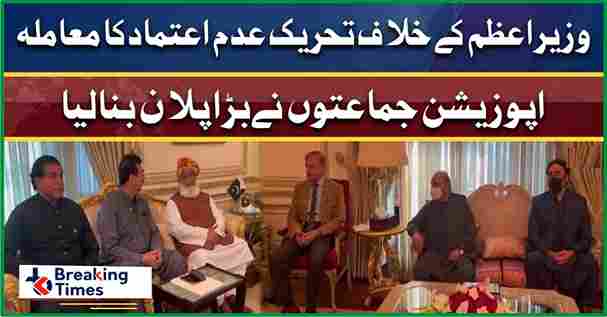 Islamabad ( The Breaking Times – Arshad Farooq Butt ) Things are getting worse for Imran Khan’s government as the no-confidence motion in Pakistan date is getting closer.

A recent example of this is interior minister of pakistan Sheikh Rashid’s rhetoric against the PML-Q which is ally of the government in the federal government.

Interior Minister Sheikh Rashid said that he stood with Imran Khan like a shadow. He was not like the people who had only 5 seats and were blackmailing the government to offer them Chief Minister office.

Moonis Elahi has come to the fore and strongly retaliated against this statement of the Interior Minister Sheikh Rasheed.

Monis Elahi has shared a 6-second clip of Sheikh Rashid on his Twitter account and shared the message saying, “I respect Sheikh Rashid but he is forgetting that he used to take money from the elders of the same party leaders in his student life.”

The MQM has also started a consultative process on the issue of no-confidence motion against Prime Minister Imran Khan and has joined hands to formulate its own strategy.

In the members’ consultative meeting, the MQM has taken a stand that it cannot become a scapegoat again and again. The waiting policy is the best at the moment. The MQM says that in both cases there is little improvement for the MQM.

It should be noted that MQM Pakistan has refused to trust the federal government. Yesterday, MQM leader and former mayor of Karachi Wasim Akhtar said that after three and a half years, there was no trust in the government.

Efforts have been intensified to unite PML-N and PML-Q

Irresponsible statements of federal ministers have widened the gap between the PML-Q and the PTI government. In such a situation, efforts have been intensified to unite PML-N and PML-Q and to conduct politics together in future. Positive developments between the two parties will be announced soon.

In this regard, the Prime Minister called on the members of National Assembly from Islamabad, Rawalpindi and Chakwal and finalized the program for the meeting. The Prime Minister assigned the task of hosting the meeting to the Islamabad organization. He has given the task to the party leaders to gather one million people for this Jalsa.

PML-Q Senator Kamil Ali Agha says that PTI is suffering from disintegration. In such a situation, the Q-League is holding consultations regarding its future.

Sheikh Rashid mocks others for blackmailing. He has become the Interior Minister by blackmailing the government on one seat.