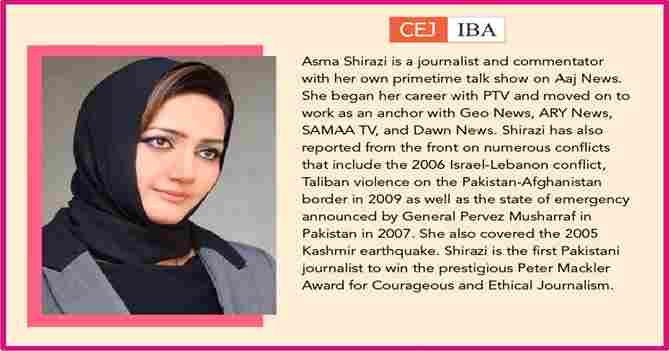 Asma Shirazi is a well-known Pakistani journalist and anchor who has worked for a number of news organizations. She was born in the Pakistani city of Islamabad in 1976.

She graduated from Punjab University in Lahore with a master’s degree in political science. She is a capable journalist and host. She is known as the best current affairs anchor for her thorough, unbiased, and fair journalistic talents.

Asma Shirazi began her career as a reporter and anchor with Geo News in 2001. She joined ARY News as an anchor and host of their current affairs show after working with GEO, and then joined SAMAA TV in July 2010. She then switched channels a few times. She also hosted two famous Parliamentary Affairs talk programs.

Asma Shirazi and Dawn co-hosted the popular show “Faisla Aap Ka”. She has also covered various wars from the front lines, including the 2006 Israel-Lebanon war, Taliban fighting on the Pakistan-Afghanistan border in 2009, and General Pervez Musharraf’s declaration of martial law in Pakistan in 2007. She has experience working as a news reporter and a talk show host.

Shirazi also hosted two famous television chat shows, one of which, Parliament Cafeteria, focused on legislative topics and was prohibited by Musharraf when he cracked down on independent press coverage. As Executive Vice President and Senior Anchor person, she joined BOL News on October 24, 2014.

In 2014, Asma Shirazi, Pakistan’s first female war journalist and anchor, was given the Peter Mackler Award for Courageous and Ethical Journalism.

She has worked on many networks like Samaa TV, GEO News, ARY News, BOL News, Dawn News, and Express News. She is one of the writers who write for BBC Urdu.

She won one of the most prestigious awards in news reporting. On October 23, a service at the National Press Club in Washington