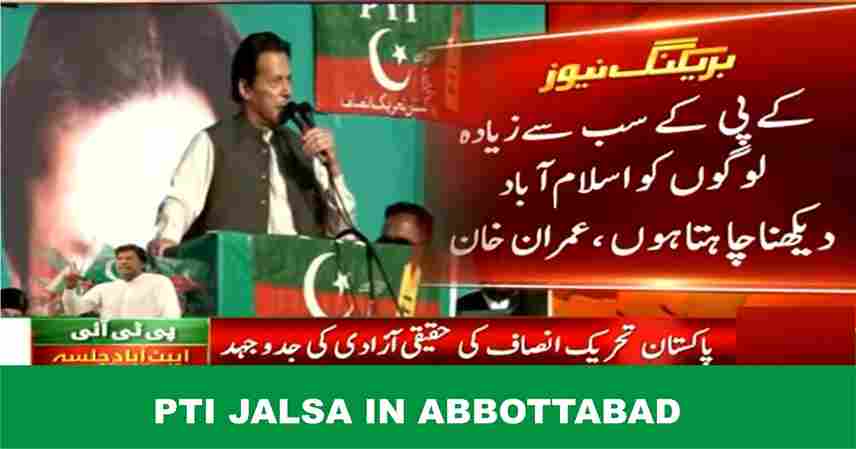 Pakistan Tehreek-e-Insaf (PTI) chairman and former prime minister Imran Khan has said in Abbottabad that no matter how many containers these people set up, more than two million people will reach Islamabad.

Addressing a PTI Jalsa in Abbottabad, Imran Khan has said that the rulers are afraid of your madness. There will be only one voice in Islamabad that we need real freedom. The nation will never recognize these bandits.

Imran Khan has said that only one Lota has come out of Khyber Pakhtunkhwa. That Lota has not gone to Peshawar yet. These people do not know that there is consciousness in the nation. The nation is awake. Even the school children know what Lota is.

He said that these people became part of the American conspiracy and removed the elected government of 220 million people, along with Mir Jafar and Mir Sadiq.

Imran Khan said that Bengal became the poorest province after the British left India. Mir Sadiq had betrayed Tipu Sultan and had joined the British Government.

The former prime minister said that we will not sacrifice our people for any country. Our tribal area was destroyed in the US war. I was never ready to join the US war.

Imran Khan said that why should I sacrifice the interests of my nation for America? America needs a ruler like Musharraf, who can be sidelined on one phone. We do not believe in any superpower. We are not going to polish anyone’s shoes.

He said that the whole nation would reach Islamabad and send a message of disapproval of the imported government. I did not see anyone telling lies like the Sharif family.