What is Imran Khan’s Trump Card or Surprise?

Dissolution of the Punjab Assembly may be announced in the Islamabad jalsa today. 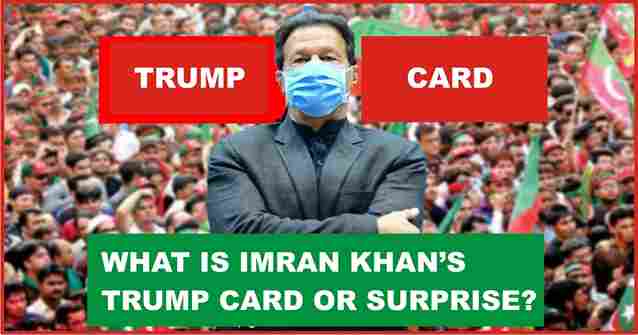 Ever since the PDM launched the no-confidence motion, Imran Khan has been talking of surprises. Imran Khan also calls it Trump card. In this article we will try to find out the possibilities what he can do.

Pakistan Tehreek-e-Insaf (PTI) workers have pinned their hopes on MPA Chaudhry Nisar in a world of despair. And many PTI workers are demanding that Ch Nisar join the PTI and support the party.

Some quarters of PTI think that if Chaudhry Nisar is made the Chief Minister of Punjab, he will bring many MPAs with him. However, this is unlikely. Chaudhry Nisar’s political future is bleak and he cannot even win the next election. In such cases, it is futile to place hopes on him.

Imran Khan may impose emergency through the president Arif Alvi

The President of Pakistan may, on the advice of the Prime Minister, impose an emergency for three months, which may be extended. However, this is also out of the question.

An emergency cannot be imposed without the consent of the pak army and the Supreme Court.

The prime minister Imran Khan may change the army chief

However, the government has become so weak that it cannot confront the pak army. Therefore, this decision also seems impossible.

This seems like the most reasonable card and it may be Imran Khan’s Trump card or surprise. After the Kamalia meeting yesterday, Prime Minister Imran Khan took the Punjab Chief Minister Usman Buzdar with him to Islamabad.

It is being said that the dissolution of the Punjab Assembly will be announced in the Islamabad jalsa today. Imran Khan may also announce his resignation.

Imran Khan’s Trump card has finally come out which is ridiculous. Imran Khan has shown the audience a worthless letter which was allegedly written by a country. Memes have begun to appear on this childish act of the Prime Minister. However some anchors think that Imran Khan Trump card was against the Establishment. Syed Talat Hussain tweets:

So the Trump Card was a direct threat to you-know-who that if you “touch me” I will reveal a “national secret that I am carrying in my pocket”. The tsunami is turning on its creators.