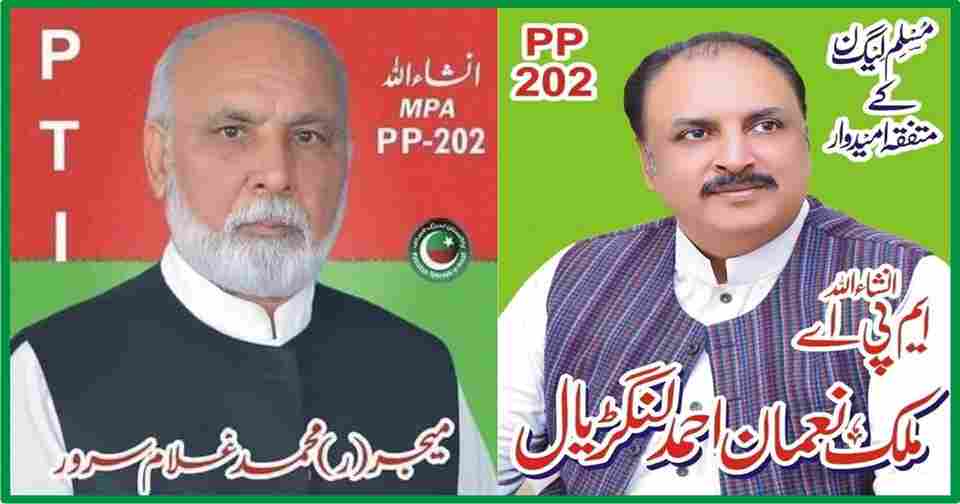 The importance of PP-202 Chichawatni in the political arena can be gauged from the fact that former Prime Minister Imran Khan and PML-N Vice President Maryam Nawaz have held Jalsas here. The final contest will also be between PML-N and PTI candidates.

The sun of July 17, 2022 rises in anticipation of which candidate’s victory, will be estimated in the next few days. However, there are a number of factors that make it easier to gauge the political landscape.

In the selection of the candidate, PML-N showed political foresight by following the pre-arranged plan. Malik Noman Langarial and his family have been in politics for decades.

His mother, Ms. Naseem Langarial, came in second in the 2012 by-elections, garnering more than 35,000 votes.

In the 2018 general elections, Malik Noman Langarial got 57190 votes from this constituency and was elected MPA. In this way, the Langarial family has been constantly trying its hand in the political arena.

On the other hand, the PTI announced the candidate too late. The Cold War between Major Ghulam Sarwar and Adil Saeed Gujjar continued for party tickets.

Adil Gujjar is the son of former MNA Chaudhry Saeed Gujjar and has his own vote bank of over 10,000. However, he could not get a PTI ticket in PP-202 and surrendered on the orders of the party leadership. Some in the local PTI constituencies believe that the leadership has made a mistake in the selection of the candidate.

In the 2013 general elections, Major Sarwar contested from NA-163 constituency of the National Assembly and got 117 votes. He submitted papers but did not contest the election. In 2018 too, he had to withdraw in favor of Malik Noman Langarial.

In any election, factionalism is the deciding factor. Among those campaigning for PML-N candidate Malik Noman Langarial are three former MNAs and three MPAs from the same city.

On the other hand, Rai Group is campaigning for PTI candidate Major Ghulam Sarwar.

Syed Samsam Bukhari is from Okara and seldom visits Chichawatni. The factionalism of the Jute group is higher in PP-202 than that of the Rai group.

If Rai Group had fielded Major Sarwar instead of Syed Samam in the by-elections of 2018, the situation would have been different today.

Sometimes people ask : In whose favor is the wind blowing? PTI dominates social media with reference to PP-202 Sahiwal. In a recent Dunya News poll, Ajmal Jami points in the same direction.

Looking at the politics of the last two decades, it would not be wrong to say that there is rare ideological vote here. However, this time the situation looks different. PTI workers are emotionally with the party. This is the only Hope for Major Ghulam Sarwar.