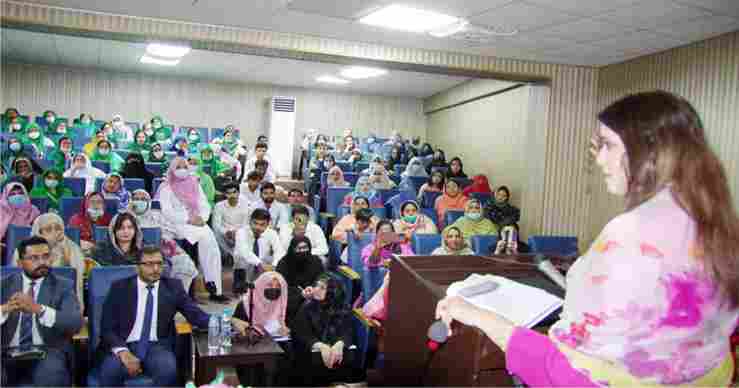 In order to provide protection to women in the workplace, it is mandatory for all government, semi-government and private institutions to have a code of conduct and a speech by the competent authority.

These views were expressed by Punjab Provincial Ombudsman Nabila Khan Advocate while addressing a seminar on Women Property Rights Act and Harassment of Women at Workplace Act at University of Sahiwal.

Addressing the seminar participants, female ombudsman Nabila Khan said that special attention was being paid to provide conducive environment for women in the workplace, prevent incidents like harassment and give women a share in inherited property. He said that the provincial female ombudsman could be contacted for speedy delivery of justice to the affected women.

He said that full implementation of Enforcement of Women Property Rights Act 2020 is being ensured and women are liable to be sentenced to 10 years imprisonment and fine of Rs. “We must all work together to discourage women from being deprived of their share of property because Islam does not discriminate in the distribution of property,” she said.

Speaking on the occasion, Deputy Commissioner Muhammad Owais Malik said that the dream of development and prosperity cannot be realized without empowering women. He stressed on the need to create awareness among the people about women’s rights and their protection They are an important part of our society and it is important to make them economically strong.

He said that women who have played a positive role in the development of the country should be encouraged. Deputy Commissioner Muhammad Owais Malik said that the district administration would play its full role in enforcing the law and Will act as

He suggested that seminars on Enforcement of Women Property Act be conducted in rural areas to provide awareness to the people there. At the end of the ceremony, Vice Chancellor University of Sahiwal Prof. Dr. Niaz Ahmad Akhtar thanked the Provincial Female Ombudsman and presented a commemorative shield.