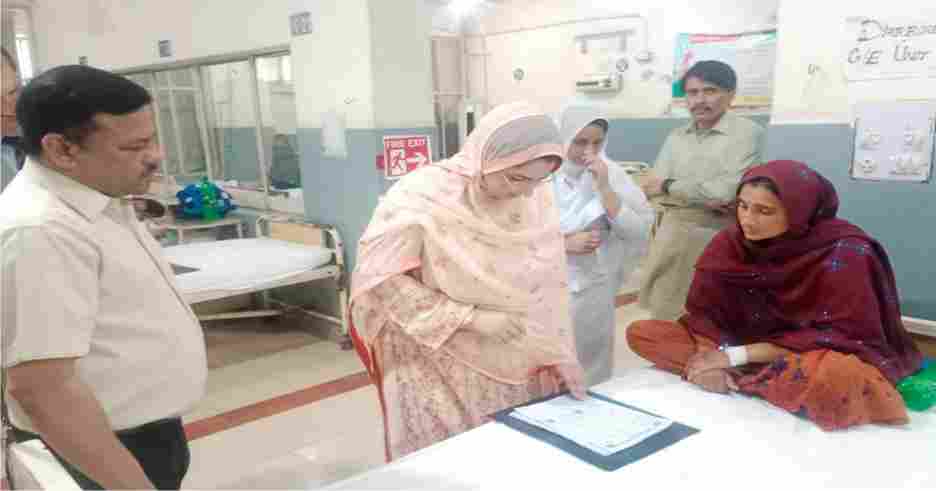 She took a detailed look at the facilities provided to the people and inquired about the problems from the people and patients present on the spot and also issued orders for immediate resolution.

Deputy Commissioner Muhammad Khizar Afzal also accompanied her. During her visit to Qayyum Hospital, she inquired about the medical treatment facilities provided to the patients.

She also visited the patients admitted in different wards and inquired about the provision of free medicines to them.

She directed the hospital management to further improve the service delivery and said that all resources should be utilized to ensure the provision of best treatment to the common man.

Later, she also visited E-Khidmat Markaz Farid Town. She visited various counters set up at the center and inquired about the facilities provided there.

Captain (Retd.) Mudassar Manzoor in charge of E-Khidmat Markaz told Commissioner Sahiwal Salwat Saeed that 134 services are provided under one roof for the convenience of citizens at E-Khidmat Markaz.

He further said that issuance of new NADRA identity card, duplicate identity card, renewal and modification of identity card, B form, family registration certificate and juvenile card can also be obtained from this service center.

Commissioner Salwat Saeed listened to the problems of the people who came to the e-khidmat markaz and also issued orders to solve them on the spot.

She also paid a surprise visit to the Land Record Center Sahiwal and listened to the problems of the people who came to the center.

She reviewed the issuance of copies of individuals, transfers, registries and directed the Center staff to issue the required documents of the citizens within the stipulated time.

She directed that public grievances at the Land Record Centers should be addressed immediately and a zero tolerance policy should be adopted on bribery complaints.